I'm Throwing My Hat Into The Ring

and it's my favorite orange furry shag beret so I better get it back! 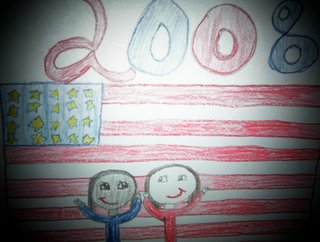 The day has finally dawned where women in politics are amassing widespread adoration and support. Consequently, my co-worker Mrs. Sam and I would like to take this opportunity to officially announce our intentions to win a place on the coveted list of potential Presidential Candidates for the 2008 election.

After the mess of our current administration and the morally defunct shenanigans of President Clinton and his crew, we've decided that we can't possibly do any worse. Mrs. Sam and I are diametrically opposed on most issues. She's an old school liberal while I'm an idealist constitutional conservative. No matter since we agree on the big issues like declaring Bic the official hair removal tool of America and outlawing scrapbooking socials. That's right scrapbooking prohibition where you'll have to set up illegal "speak-easy" craft dens to engage in illicit paper cutting activities. We've found moderate ground on other less important National items.

As of yet we haven't decided on our campaign slogan but we've narrowed it down to "Two Bushes Are Better Than One", or "Isn't It About Time To Have A REAL Bush As President"? Classy, I know. The best part is that we don't have to use precious fundraising money to create a campaign song. I've found the perfect ditty that contains both of our names in it. How unusual is that? Like it was pre-ordained for our personal exploitive use. It's "Doin Da Butt" by E.U. The beauty of it is that it's already passed Presidential muster because George Bush's wayward daughter, Jenna, has been seen dancing around on all fours, shaking her booty to this raucous song at a club. I included the lyrics so you can guess what our names are when E.U. starts shouting out such brilliance as,"Sonja got a big ole butt. Oh Yeah.".

This is a pivotal time in history. A time when every decision is crucial to the sovereignty and ultimately the survival of our great country. Can Mrs. Sam and I count on your support to make our dreams of leadership and serving you, the U.S citizen, (or possibly a wealthy Middle Eastern oil tycoon family), a reality? Just write to us with the things you want promised to you if we're elected and include a crisp twenty dollar bill with all correspondence to: The Smiling Infidel P.O. Box 911 Crackertopia, U.S.A

Posted by elasticwaistbandlady at 7:00 PM

I'm voting for anyone who outlaws those dens of iniquity otherwise known as scrapbooking parties. You can count on my support! What else is in your platform??

Anyone, anyone but please not Condaleeeeezzzzza Rice (Queen of the Lizard People).

I don't know what my wife would do without "Croptoberfest," but I'm willing to give you guys a shot.

I'm a Capitalist, so what do you have to tempt me?

Should be a good combination, you and Mrs. Sam. Any anti-scrapbook legislation will meet resistance from the other side, but I'll be there to rally support for the cause. As long as you lower gas prices.

Will you wear your tiara if elected? And will Mrs. Sam have one, as well?

Let's ban all casseroles! And while we're at it...makeup, and allow everyone to wear cutoffs whilst swimming! Can I be secretary?

I can promise all of you fine people positions in our administration. elizabeth will be the resident White House psychiatrist, carrot jello and her food fixation will be perfect as Secretary of Agriculture, omar;Minister Of Technology and Photoshopping (I'm depending on YOU Omar to minimize my butt in publicity shots), mimo; Secretary of Education, so us Moms won't be forced to homeschool our broods anymore.

Pisces, since you're a foreigner you'll have to settle for being appointed our 'Doomsday Poet Laureate'. Gia lives in Canada but she can film some great propoganda movies for Mrs. Sam and I.

wendela, I'll already had a very lucrative campaign contribution pledge from Beano anti-flatulence pills, but then that would defeat my entire plan for alternative gas sources to reduce our high prices.

I don't wear makeup like that hussy "fake" President Geena Davis because of my natural beauty. Ditto for Mrs. Sam. Get ready for the big Inauguration Party, we're trying to coax E.U. out of obscurity and get him to perform 'Da Butt' live for your rump shaking pleasure, and there will be enough tater tot casserole and lime green carrot Jell-O for everyone!

wendela, I forgot your new position. Secretary of Housing because of your real life "hands-on" horrific experiences. You can also be our official Valley Girl speak interpreter. Like Oh My Gawd, fer sure!

I am *so* "for" this. Consider me a political supporter. Which I hope will not be the same as athletic supporter. I'm not complaining, mind you. I'm just saying.

*Mimo takes all the little kiddies to the basement bunker to knit rifle cozies*
EWL- I contribute one billion dollars to your campaign. Do you accept Monopoly money?

At my old job, a lady who got a portrait taken wanted me to Photoshop out her "spare chins." When I did that, she also made me take away some of her wrinkles. And while it was some of my finest work, it made me feel... dirty. Like I was helping someone lie.

But if it was actually part of my job description as Minister of Photoshopping, well then that's fine.

Sec. of Housing it is. However, that Valley has different "speak" since the Zappa days, so guess I'll hafta be more fluent - 송금하다 , envíeme el dinero, etc., etc. I'll figure it out. Just send money.

You need a campaign photo of you in your furry orange shag beret.

I nominate Patrick Henry for secretary of entertainment.
He'll sort hollywood out!

First, I'd expose the Baldwin brothers for the bull-dyke lesbians they are (you know they are-don't fool yourself any longer), then I'd ban Cosmopolitan and like mags from publication. Then, for entertainment, I'd hold a U.N. party in los angeles, then set off the San Andreas fault to separate the west coast from the U.S. I'd nominate Texas as the new capital and raze D.C. I'd move all of the homeless in NY into the now vacant U.N. buildings. I'd either legalize Marijuana or illegalize alcohol, because the laws right now are weird. I'd annex Mexico, because we all know we already own Mexico; we just haven't gone through the formality of annexation. Right, Vincinte? Then for my own personal entertainment, I'd give Iran 24 hours to vacate all of their industrial areas then nuke the shit out of them (the industrial areas). Then, I'd mist Syria with pig's blood to dash their hopes of 72 (is it 72 or has it gone up to entice more stupid people?) virgins in the afterlife. I have a question: do women get 72 (?) virgin men in the afterlife? That would be sexist if they didn't. And wouldn't all of that facial hair Muslim men can't cut off give the women in paradise irritation in their...pleasantries...? Anyways...Star Wars would be the national U.S. movie. And then we would make fun of anyone who adopts a Smashing Pumpkins album as an e-moniker. Just for entertainment...

I'd like to thank my Doomsday Poet Laureate, and Minister of Entertaining Defense Department for bringing their roiled up discussion over here. WOOT!

If anyone needs me I'll be filling the Presidential kiddie pool with some lime green Jell-O (no carrots in it), and let them determine the victor the old-fashioned way......Jell-O wrestling! Don't forget to wear your Speedos.

Poor P(at)rick - he really is upset isn't he?

Actually Pisces, Patrick is just being very tongue in cheek with his creative rhetoric and I can't help but smile broadly at his sentiments. VERY broadly.

The Smiling Infidel Card Shop Is Open For Business

What To Do When Your Baby Is Born A Hooker

Caught Up In The Raptor Of Love!

Touched By An Infidel!

Don't You Dare Label Me!

elasticwaistbandlady
My name’s Elastic but I lost my “snap” some years ago. Now, I’m the mental equivalent of underwear with the stretched-out waist that sags and bunches and slides down at the most inopportune moments.

Yeah, We Be Infidel And Gangsta Both!

My Other Blog Is Full Of Beans.......Mexican Beans. Viva La Frijole Power!