The Christmas Ornament Theme This Year? 'A Head-Hunters Delight!'

Here I am.......The Smiling Infidel, your intrepid Christmas ornament reporter bringing you all the latest trends in this season's hottest tree wear!


It appears that the creepy, floating Santa head look is taking a big corner of the ornament market this year. This Santa has some of the most mournful eyes I've ever seen on a supposedly 'holly, jolly guy.' Why the sad face, Santa Baby? At least you can feel secure in the knowledge that no one will ever use you just for your body. 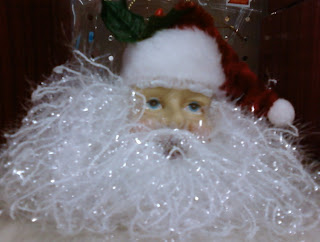 My camera obscured the printing on the packaging for this angel, but she is indeed a genuine Tassel Angel made of genuine Tassels. Who needs an angelic body when you have streaming, swishy tassels instead? This is why I always wear tasseled loafers so that if something ever happens to my body they can make an immediate tassel transplant. I stipulated it in my Living Will and everything. So next time you're feeling particularly grateful for the magic of tassels, you now know who the Tassel Patron Saint/Angel is! Who knew that Mrs. Claus' macrame obsession would turn into such a profitable business venture? Yes, Mrs. Claus opened a Beard Club For Men. They specialize in replacing balding and threadbare beards with a stunning hand-made macrame version that looks and feels just like the real thing. Remember, Santa Claus isn't only the Beard Club For Men's President, but he's also a client! [Two-faced, two-headed Santa ornaments are another kind of creepy altogether. Did they have radioactive contamination in that North Pole water or what??!!?]I predict this look will be very popular with Trophy Hunters this Christmas......... Santa heads to hang up alongside their moose and deer heads over the mantel. I wonder if they'll tell their buddies, "Yeah, I bagged that one on my last hunting trip up to the North Pole. He put up a tremendous fight."

Maybe a headless Santa ornament craze will hit next year and we can make whole oncemore what was broken.

Posted by elasticwaistbandlady at 10:46 PM

Santa heads creep me out. I had a Santa head decoration that played music when someone walked by it. One night I forgot it was on and it scared the crap outta me. Some nights when I'm awake by myself,I can still hear it.

Those are some pretty frightening Santa ornaments. The music is equally as frightening. I hope I don't dream about floating santa heads tonight.....

Do those tasseled-angels come two to a pack?

At least they weren't PASTY angels. (preparing for lightning)

So, floating Santa heads of death, huh... "Beard Club for Men" cracked me up. "I suffer from beard baldness."

"They must have hated this moose!" - name the movie

Beard Club for Men is a great line.

lol at glittersmama's comment. creepy body-less santas. i'm PRETTY sure my grandma had one of those in her house during holidays. all of them.

The first Santa is sad because his beard looks like a little girl's tutu in a dance recital.

Wait, where can I sign up for this beard club for men?

I have a beard hair, well I usually refer to it as a goat hair, that grows long and lovely. it even has a slight curl

on my chinny chin chin

I am w/ Staci, Santa heads creep me out but not as much as clowns.

In fact, thinking about it. Santa is a sort of a creepy dude....

You know who is missing and getting the shaft???

I wondering if he's being descrimnated upon cuz of his shiny red nose?!


Anyway... clickety!
Sorry I didn't do my second tour of duty from home yesterday but the Husband was hoggin the computer!

There is going to be a Christmas episode of Supernatural. There will be flashbacks that show little Dean and Sammy.

Looking at the Santa heads, surely you could scare the bejesus out of kids at Halloween by coming to the door holding the head of Santa, shouting "I got him! no more presents for you kids, MWUHAHAHA"

From now on, I'm donating all my plucked mustache and chin hairs to "Beard Locks of Love."

Maybe this is a new marketing gimick... they are just gonna merge Halloween and Christmas so that they can companies can milk the consumers just a little more....

Santa's nose is a little slim (in that last picture) I thought it was round and rosey.

Scary Christmas to all! And to all a good nite!!

I had a Santa head ornament on my tree until the cat claimed it and walked around with it in it's mouth. it was too wierd...I couldn't put it back up

mmmmm bacon spray...
I know that has nothing to do with this post but I have bacon spray on the brain now!

HAHA!!! Yes, I do suppose that the santa heads would be quite popular among the deer hunters/mounters of heads on walls!

Thank you for the best good mail ever! It was quite a delightful Infidel suprise!

I saw that nappy bearded Santa at "our store"

All heads turn when he floats into a room, except for his, because he has no neck!

I've never seen a Santa head before. Between that and the creepy hand...jeez! Where do you shop?!

I love creepy head-only Santas! It reminds me of the time I went to a lake and saw, um....nevermind.

Thank you so much for surprising Lauren and me with the GREAT good mail! We got lots of laughs from it! I unselfishly helped Lauren devour her candy corn, and Zach couldn't believe that Elasticwaistbandlady sent him Peeps of his very own! You're awesome! :)

I'm particularly fond of foil cover egg carton cups masqarading as bells, so I think floating decapitations of a jolly old elf and a wistfully tassles angel would fit right in.

Imagine the macabre site the factory must be, legs, arms, torsos, random feet here and there...

I would share my burger with you any day... and my fries too cuz you're special like that.

I'm thinking that the tassel angel is the patron saint for strippers...Tassels anyone?

It makes the lyrics "He see's you when your sleepin he knows when your awake." to another creepy level okay. I never really like Santa. But I make sure my kids get to see him so I dont have to be a "bad" mom who hates Santa so I dont let them see him.
I personally LOVE Snowmen. Totally in love with those guys.

I had a Santa head ornament one year but my sister pointed out that it looked like a Voodoo shrunken head, it lost its place on the tree after that.

elastic, i want to thank you for my halloween goodmail that i received today but don't have your email address!! so THANK YOU so very much. you made my day with your hilarious good mail. ((hugs!))

The Smiling Infidel Card Shop Is Open For Business

What To Do When Your Baby Is Born A Hooker

Caught Up In The Raptor Of Love!

Touched By An Infidel!

Don't You Dare Label Me!

elasticwaistbandlady
My name’s Elastic but I lost my “snap” some years ago. Now, I’m the mental equivalent of underwear with the stretched-out waist that sags and bunches and slides down at the most inopportune moments.

Yeah, We Be Infidel And Gangsta Both!

My Other Blog Is Full Of Beans.......Mexican Beans. Viva La Frijole Power!